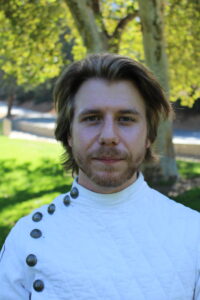 Mr. Nelson began fencing at the Salle Saint-Georges in 2008 while attending the University of Washington in Seattle, where he studied history, Latin, and music. Under the tutelage of Maître Cecil Longino, Mr. Nelson became fascinated with the living traditions of classical fencing. The demand for precision, consistency, and the cultivation of character integral to the program at the salle impressed upon Mr. Nelson the value of maintaining these rare arts.
In 2013 Mr. Nelson earned his B.A. in history from the University of Washington, and applied to the Martinez Academy of Arms Instructor in Training Program. He earned his certification as an instructor of French foil in December, 2015, and opened the Nelson School of Arms in Los Angeles in 2016. He now teaches fencing in Santa Rosa, CA.